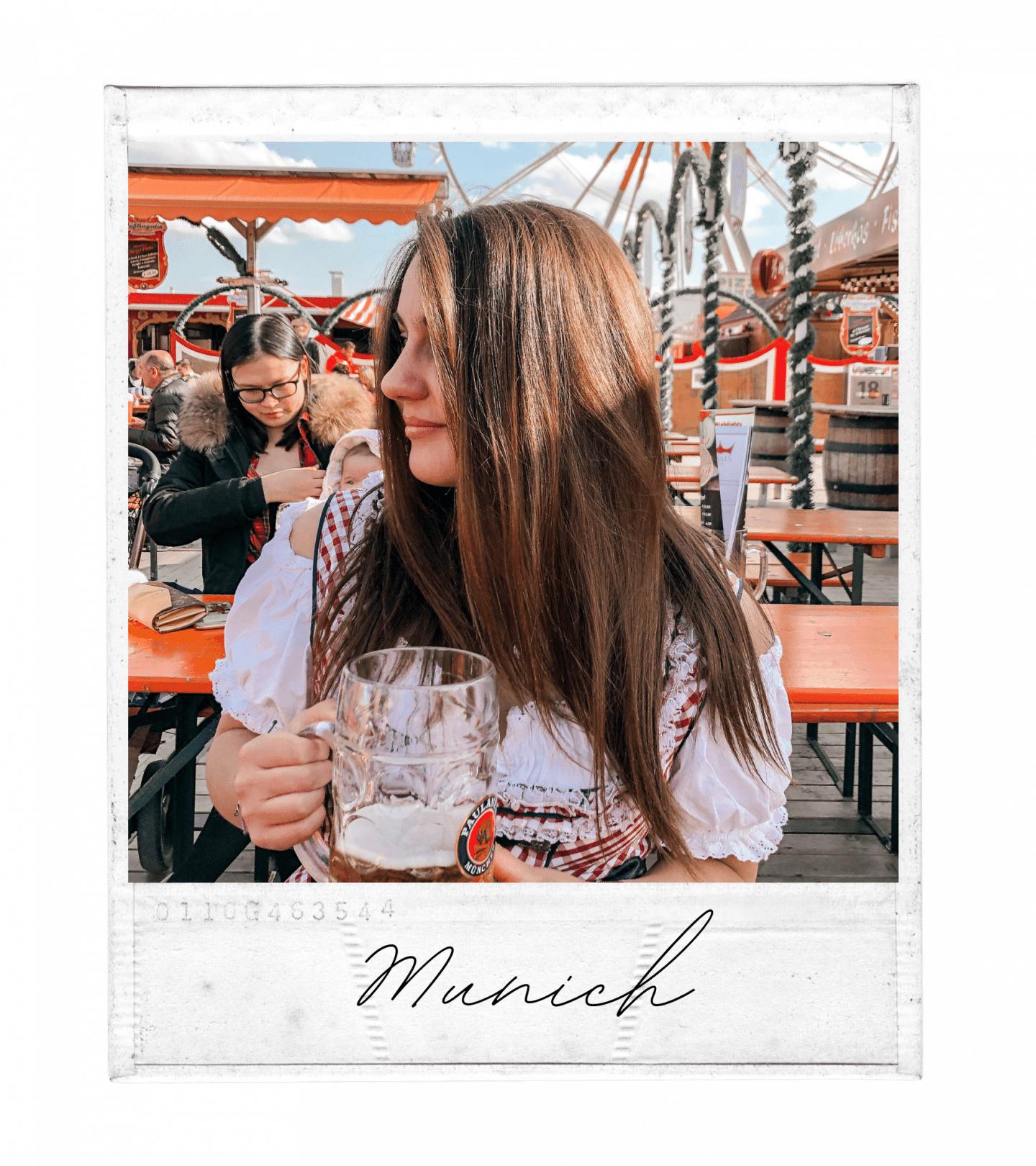 Although Munich is a fantastic city to visit any time of the year, the city truly flourishes during festival season. Oktoberfest (late-September through early-October) and Fruhlingsfest (late-April through early-May) seasons are the ideal times to visit Munich. So pack up your dirndls (or lederhosen) and get ready to Prost! But as much fun as the festivals are, there is much more to do in Bavaria than drink…check out my suggestions below for the best travel itinerary for Munich, Germany!

**This post contains affiliate links, which means if you buy something through those links I will receive a small commission at no extra cost to you. Thank you for your support!

Where to Stay in Munich

For most of the year, Munich is a very affordable tourist destination. This is unfortunately not true during festival season. Since millions of beer-lovers around the world gather in Munich for Oktoberfest and Fruhlingsfest, accommodation prices tend to skyrocket and a hostel stay in an 8-bed dorm room could cost you as much as €100/night.

Accommodation prices in Munich are always going to be expensive during the festivals, there’s no getting around it. But booking as early as possible can sometimes save you a few bucks in the long run! My personal favorite accommodation in Munich is Jaeger’s Hostel. Their location couldn’t be more perfect, right across the street from the main station Hauptbahnhof. You can easily take the train, otherwise it only takes 20 minutes to walk to the festival grounds from the hostel.

They also have a fun bar in the lobby where dirndl and lederhosen-clad festival-goers tend to gather after the beer tents shut down at night!

If you’re looking for the best nightlife Munich has to offer…there’s no other place for you than the Stoke Campsite. Stoke Travel is the craziest tour operator out there! Although they’re based in Barcelona, they’re mostly staffed by Australians…and Australians LOVE to party. Booking a tent with Stoke includes breakfast and dinner each day and unlimited access to the wildest party in Munich! For €20 extra, you can get unlimited beer and sangria for your entire stay.

Germany takes the euro. Make sure to withdraw cash from a legitimate bank ATM and steer clear of the currency conversion shops and Euronet ATMs.

Prost at Oktoberfest or Fruhlingsfest

Oktoberfest, the world’s largest beer festival, is based in Munich and originally celebrated the marriage between King Ludwig I and Princess Therese in October of 1810. Over 200 years later, travelers from all over the globe still travel to Munich to drink steins full of delicious German beer and dance on a table or two.

Fruhlingsfest, a.k.a. Springfest, is essentially Oktoberfest’s chill, younger sister. If you love beer and German food, but want to avoid the bulk of the crowds, head to Munich in April for Fruhlingsfest instead!

Girls: there’s an art to tying a dirndl and each way means something different in Bavaria. Tying the bow on the….

Right: the wearer is in a relationship.

Left: the wearer is single.

Middle: the wearer is a virgin.

Back: the wearer is either a widow, child or waitress.

Lastly, there are strict rules on how to prost (cheers) in Germany. You must make eye contact with the person across from you as you clink and yell “PROST!” If you clink without making eye contact, German’s believe you are cursed with seven years of bad sex.

…don’t forget to eat ALL the German food and try out the rides! The festival is packed with food vendors! Each one sells delicious Bavarian cuisine packaged up and easy to eat on-the-go. My favorites are the käsekrainer (AKA cheese weenies), spaetzle (German mac n’ cheese), and Obazda (beer cheese dip) with a warm pretzel.

Listen to Live Music at Hofräuhaus

Where the beer is delicious and as big as your face and the pretzels are salty and…also as big as your face! No visit to Munich is complete without a stop at the historic Hofbräuhaus. At the beginning of the 20th century, Munich’s Hofbräuhaus officially became the most famous tavern in the world. The biergarten stands as a symbol of Bavaria at over 500 years-old!

Marienplatz (Rathaus and the Glockenspiel)

Marienplatz is my favorite, and the most picturesque, square in Munich! Because a lot of the city was destroyed during WWII, not much of the original architecture remains today. The square, especially the Rathaus or New Town Hall, gives you a glimpse back in time at what Munich looked like before the war.

Similar to the clock tower in Prague, the Glockenspiel puts on shows for tourists a few times a day. If you happen to be in Marienplatz around 11AM, 12PM, or 5PM, make sure to stop and see the show!

The best views of Marienplatz can be found on the rooftop terrace of St. Peter’s Church. A student ticket is only €3, but be prepared to climb some serious stairs for that view. The terrace can get pretty crowded during festival season so I would suggest getting an early morning head-start. I love finding amazing views in every city, so the rooftop of St. Peter’s Church was definitely one of my favorite additions to my Munich travel itinerary!

Right around the corner from Marienplatz sits Odeonsplatz, another of Munich’s most famous squares. Theatine Church, built in the 17th century, dominates the square with its bold, yellow facade. The inside of the church is even more stunning than the outside and entrance is free!

The Feldherrnhalle dominates the left side of the square and was actually modeled after Florence’s Loggia in Piazza della Signoria. Inside the Feldherrnhalle sits famous statues telling the stories of Bavaria. The statues are guarded on the outside by two stone Lions.

Why are the English Gardens in Munich better than gardens in other cities? Because of the four beer tents you can find in the center of the park! If you’re looking to get out of the bustle of the city center, the English Gardens are the perfect place for a relaxing walk or bike ride topped off with a cold German beer and a warm pretzel.

A fact you might not know about Munich…it’s the river surfing capital of the world! You’ll see professional surfers braving these treacherous river waves throughout the city. But don’t get any ideas…these waves are for professionals only.

One of my favorite ways to see any new city is on a bike tour! Mike’s Bike Tours offers a great 3-hour tour leaving from Marienzplatz that highlights all the best that Munich has to offer. They usually include a break in the English Gardens for a beer and a well-deserved snack. There can be a lot to see in Munich and Mike’s Bikes does a great job of showing you lots of amazing places at once!

Right around the corner from Marienplatz, you’ll find the Viktualienmarkt. A large farmers market located in the city center, it’s the perfect place to grab lunch and people watch in the sunshine.

Although not many of us feel the need to grocery shop on vacation, the food stands in the Viktualienmarkt offer every German specialty you could think of…from giant pretzels to sausages smothered in curry sauce. I love spending an afternoon wandering around the Viktualienmarkt and it’s one of my personal favorite stops on my Munich travel itinerary!

If you need a bit of a culture fix between beers, Residenz München is the best place to start. The museum used to be the royal residence of the monarchs of Bavaria and is filled with impressive art from all over the world. Although some of the rooms have been reconstructed after being partially destroyed in WWII, the restoration is impressive and you still get an accurate idea of what the palace looked like before the war.

On a more somber note…Dachau Concentration Camp was one of the largest concentration camps in operation during WWII and is only a short train ride outside of Munich. The museum and the memorial are very well done and, along with being very educational, a visit to Dachau is a very humbling experience. Like much of the city, many parts of the camp were destroyed during the war and reconstructed later on.

The camp itself is free to enter and the train ticket to Dachau only costs around €9 from Munich’s city center.

No Munich travel itinerary is complete without a visit to Neuschwanstein Castle. The masterpiece of the mysterious King Ludwig II, the castle is located in Schwangau, about a 2-hour train ride outside Munich. You can easily start from Hauptbahnhof station and make the solo-trip to the castle*. However, if you are more interested in joining a group, Sandeman’s New Munich offers a great Neuschwanstein Castle tour leaving from Munich.

Even if you’re not a history buff, the story of King Ludwig II and his world famous castle is sure to peak your interest. There is a great conspiracy surrounding the way the King died… Officially the death was ruled an accidental drowning, but many believe the royal family had him killed after he bankrupted them building his luxurious castles. You’ll have to visit to see which story you believe!

The best place to get stunning photos of the castle are from the suspension bridge, Marienbrücke. If you are afraid of heights, or sketchy suspension bridges, I would suggest you stay far away from Marienbrücke. With over 100 tourists on the bridge at any given time, it doesn’t feel the most secure. Scary bridge aside, a day-trip to Neuschwanstein is one of my favorite things to see in Munich!

*If you do decide to plan the trip yourself, take the train from Hauptbahnhof to Füssen (about 2 hours).

If you decide to hike to the bridge, be prepared for some pretty stunning views of Alpsee Lake on your way to the top!

…and if you’re hungry near the castle…

Grab Some Lunch at the Alpenstuben Hotel

The Alpenstuben Hotel is a great option for a quick sit-down lunch near the castle. Just a couple minute walk from the train station, they serve one hell of a pork knuckle. Trust me when I say it’s extremely filling…I still have no idea how I finished this by myself before a hike.

Explore the Art Collection in the Alte Pinakothek

Alte Pinakothek is one of Munich’s most cherished art museums and is home to over 700 paintings. The museum was commissioned by King Ludwig I and tickets only cost €5 with a student ID. Most of the artwork has a corresponding plaque explaining the artist and the meaning behind the art, but they also offer an audio tour if you want more of an informative experience.

Eat ALL the German Food

German food is one of my favorites and I always make sure to eat lots of it in Munich! If you want to try some tasty and authentic German cuisine check out my post The Best Bavarian Restaurants in Munich!

Munich is filled with rich history, culture and hearty food. The locals are fun and friendly and the city offers something for everyone! No matter your travel style, Munich should be on your bucket list. If you’re interested in some of my other guides to Europe’s most-popular cities, head to my posts…

Thanks for reading and if you enjoyed my Munich travel itinerary, make sure to follow my blog and my adventures on Instagram @madisonsfootsteps.

This site uses Akismet to reduce spam. Learn how your comment data is processed.

Madison. Just a 25 year-old traveler trying to fill her passport without emptying her wallet.

END_OF_DOCUMENT_TOKEN_TO_BE_REPLACED

The Best Things to Do in Roatan, Honduras

END_OF_DOCUMENT_TOKEN_TO_BE_REPLACED

Sign up today to receive exclusive access to my new PDF guide, "The Solo Traveler's Guide to Photography!"